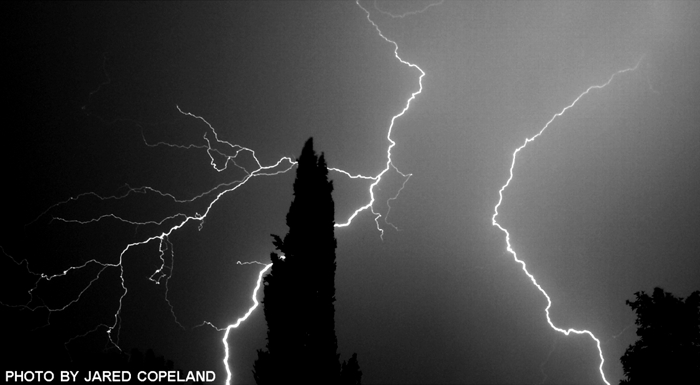 Question: I read somewhere that lightning bolts are really straight, and their forked appearance some kind of an optical illusion. Electricity does take the shortest path to ground, right?  — KO, Mesa, AZ

Answer: I’ve read that too, but as you can see from the image above, lightning does indeed branch. While it’s true that some types of optical illusions (such as mirages) can be captured on film, experiments in labs have shown the branching of lightning is a very real effect.

I’m not sure how this rumor got started, but suspect it’s related to a misunderstanding of what is meant by “the path of least resistance,” which to most people implies a straight line, and the shortest path to ground.

Lightning bolts do follow the path of least resistance, but air is not a uniform medium. Even within what appears to be “clear air,” there are pockets with very different electrical characteristics. Some are easy for lightning to travel through, some are difficult. It depends on things like humidity, dust, smog, temperature, and wind.

As electrical charge moves through the air, it’s constantly veering — seeking the easiest path to its goal. That goal can be the ground, another cloud, or even open sky. So the easiest path is rarely the straightest path. The photo was taken in the middle of Phoenix, during a fine monsoon lightning storm, using a Kodak C875 with an 8 second exposure.

My thanks to Jared Copeland for bringing this photo to my attention, and for allowing me to use it.