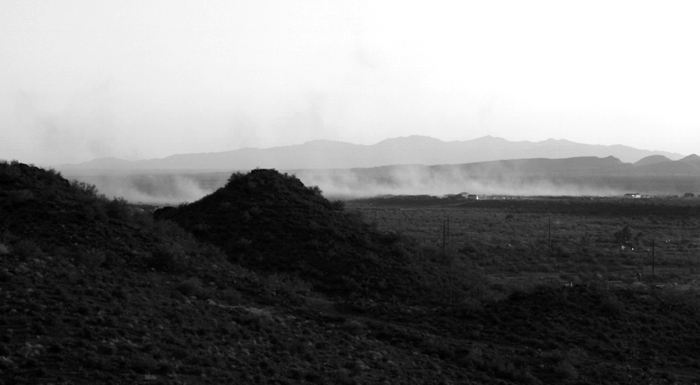 Question: It seems like there’s so much dust in the air around here. I’m not talking dust storms, just general dust. It interferes with my ability to see all the stuff on your charts. Is there anything I can do about it? — FZ, Carefree, AZ

Answer: The quick answer is “We live in a desert and there’s just a lot of dust to go around.” It’s a real problem, for astronomy as well as for those of us who breath. It also wreaks havoc on machines with unsealed moving parts.

And it doesn’t take much wind to get that desert dust up into the air. The image above shows an area just west of I-17 north of Phoenix during 15 mph winds. The problem is made worse by the fine size of this dust. When the wind stops, it doesn’t quickly fall back down to the ground — it remains suspended in the air for days, or until the next cleansing rain. With particle sizes less than 0.05 mm, it can hang in the air “defying gravity” much like water drops in clouds. Suspended dust is usually what’s messing up your view of the sky at night.

Normally, vegetation on the ground will hold most of this dust in place, except during very high winds, or in dust devils. But even in virgin desert, there’s still a lot of open space between plants. On sites where construction or grading is underway, all plants are stripped off, exposing the dirt to the wind. That’s what’s happening in the photo above.

Recent grading has removed the protective ground cover. The EPA and ADEQ require areas like this to be treated with water or (expensive) chemical fixatives to help hold the dirt in place. You’ve seen those water trucks I’m sure.  Unfortunately, they can’t be there 24/7 (even though they should). So for now, we hold our breath.