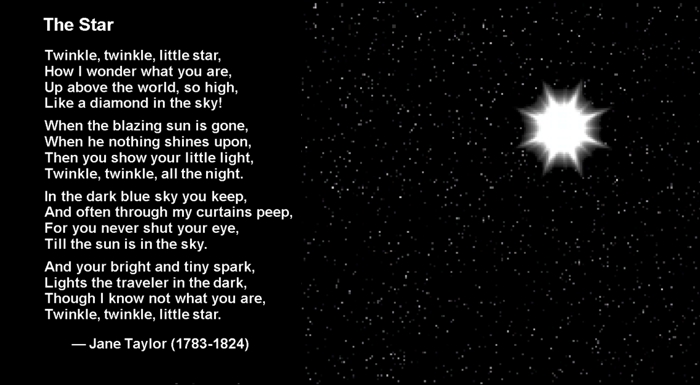 Question: Where did that poem “Twinkle Twinkle Little Star” come from? I think it was the first poem I ever learned. Also, do you know if there’s any more verses? — LG, Cave Creek, AZ

Answer: This is more a question for your English teacher, but I never turn down anything that has anything to do with weather or astronomy. All four verses are printed above.

The poem was first recorded in writing in the early 19th century, and first published in a collection of poems titled Rhymes for the Nursery in 1806. Author Jane Taylor had little knowledge of astronomy. In fact, until early in the 20th century, astronomers themselves were still wondering what stars were. Still, it’s an engaging and easily memorized poem that captures the childlike wonder of stargazing.

And before you ask me about that other poem:  “Star light, star bright, first star I see tonight …” I’ll tell you what I know, which isn’t much. It’s origin is unknown, but the superstition of “wishing on the first star” goes back very far in many cultures. The author is lost in the fog of time. It first showed up in print in late 19th century America.

That superstition says: If you make a wish to the first star you see at night, that wish will come true. It’s thus ironic that the first object seen an many nights is a bright planet (Venus or Jupiter), and not really a star at all.