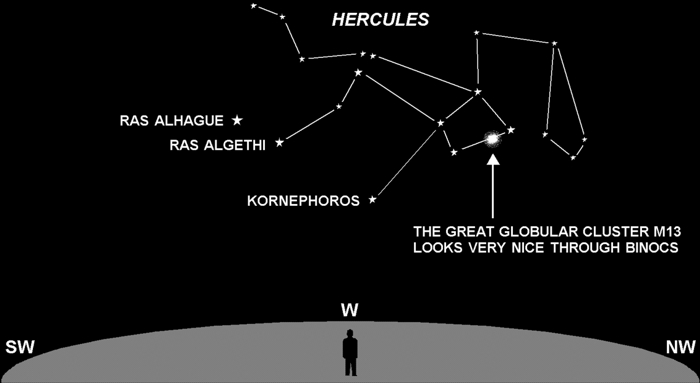 Last we visited Hercules (May 24 of this year) he was lower in the sky, and toward the east. Now he’s toward the west and a bit higher up. Most of the stars that trace his form are relatively dim, except for the four that form his head. Look for those four in that shape, and you should be able to spot him.

He’s facing down toward the horizon now, with his club still lofted to the north. The stars that make up his head are the brightest, but they’re still too dim to have “real” names. With few exceptions, only the brightest stars claim this honor. Instead of names, they have symbols.

Clockwise from the top they are:  π-, η-, ζ-, and ε-Herculis. The strange symbols are the Greek letters pi, eta, zeta, and epsilon, which indicate the relative brightness of each star in alphabetical order. Since the first letter of the Greek alphabet is α (alpha), the brightest star in Hercules is, by default, α-Herculis. The “Herculis” part of the designation is the genitive case of “Hercules.” That’s standard astronomical nomenclature.

In Hercules, and all other constellations, the α star does have a “real” name. In this case it is Ras Algethi, a red supergiant star 500 times the size of our Sun. This huge star appears dim due to its great distance from Earth — about 550 light years as the crow drifts.