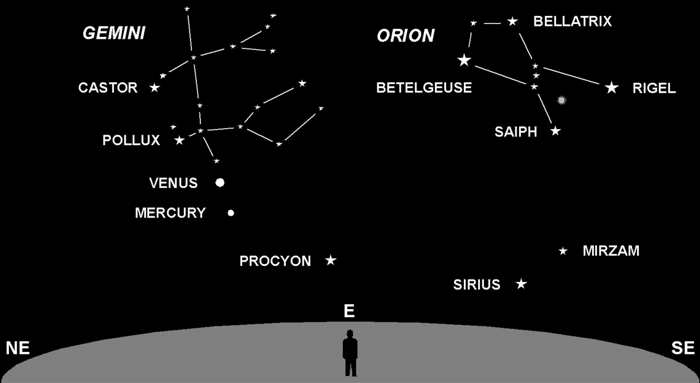 This week’s column is about a morning observation, so if you want to see the show, you’ll need to get up before the Sun, say 4:45 am to 5:15 am. Rise sufficiently early and you’ll be treated to a dazzling display of stars and planets.

Topping the bill is Venus. It’s the brightest object up and will be easy to spot. Venus is one of the few planets that can surpass Sirius in brightness. Venus spends half its time in the morning sky (when it’s called the Morning Star) and half in the evening (as the Evening Star). It is, of course, a planet, but these other names are still often used.

Just below Venus is elusive Mercury. It’s not as bright as Venus but, as its mythological name suggests, it’s fast. If you watch it for a few days, you’ll see its rapid motion relative to other nearby objects.

Sparkling lower yet (if there are no mountains or houses to block your view) you’ll see Sirius and Procyon, the brightest and 7th-brightest stars in the sky. Above Sirius is Orion (The Hunter), with two more bright stars: red Betelgeuse (8th-brightest) and blue-white Rigel (6th-brightest).

Finally, just above Venus, you’ll find Gemini (The Twins) marked by the nearly-identical stars Castor and Pollux. You’ve got to get up early at least once this month.