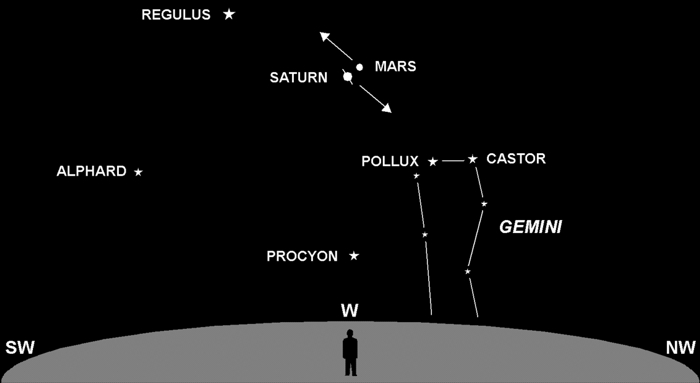 During the first two weeks of June, you can follow the close approach of Mars and Saturn as they interact in the celestial dance known as conjunction. Whereas the stars are fixed in their positions, the planets drift around the sky moving relative to one another. When they pass each other, they are said to be in conjunction.

Mars and Saturn will be at their closest approach on June 17th, when they will be separated by a mere 0.5° (about the diameter of the Full Moon). With low magnification, either through a telescope or binoculars, both should be visible in the same field of view.

No worries about planetary collisions, as Saturn is some 800 million miles farther out than Mars … they just look like they’re close as seen from our frame of reference. Watch these two planets over the first two weeks of June, and you’ll see them move relative to the stars and each other.

Conjunctions happen all the time, and all planets participate. It’s a natural consequence of the fact that they all orbit the Sun in about the same plane. If you were stargazing from Mercury (not recommended), you would see Earth now near conjunction with Jupiter.

The Not-So-Mighty Hercules
Q&A: Canines and the Moon
HOME