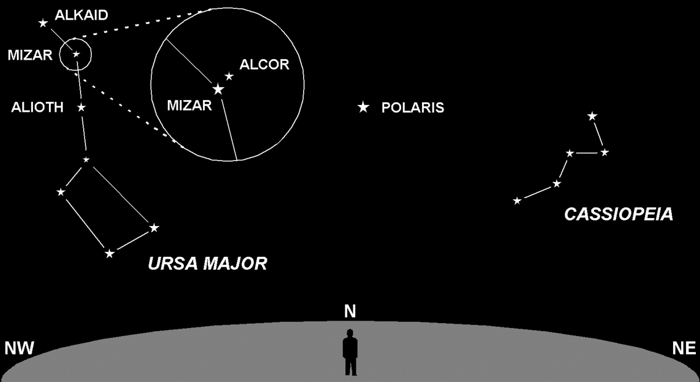 What we see as the “Dipper” is a subset of a larger group that looks sort of like a bear. The bowl of the Dipper is part of the bear’s back, and the tip of its handle is the bear’s nose. Don’t waste your time trying to see the whole bear. Most of its stars are very faint and many of them are below the horizon.

Instead, focus your attention on the second star from the end of the handle. Mizar appears at first glance to be a relatively bright star. But if you look more closely, and if your eyesight is good, you may be able to spot Alcor just above and to the right of Mizar (see inset). With binoculars or even a small telescope it will be obvious.

The ability to resolve these two very close stars, using only your unaided eyes, has been a test of visual acuity for centuries. Astronomers call this feat “splitting the double.” So if you can’t make out Alcor, see your optometrist. If you can, see your astronomer.

Q&A: Difference Between a Star and a Planet
Q&A: What a Black Hole Looks Like
HOME