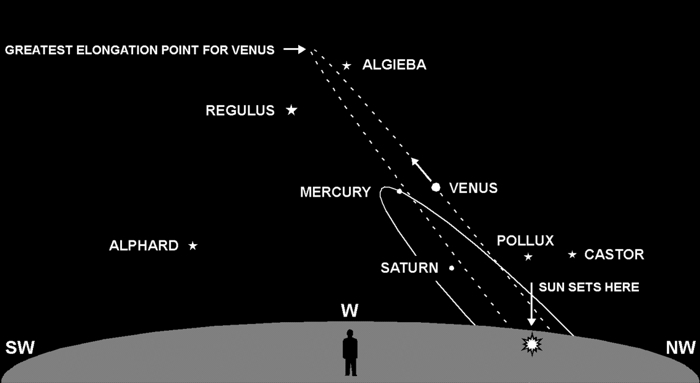 Mercury and Venus are both visible in the west shortly after sunset for the first two weeks of this July. We refer to them as inferior planets, not because they are lacking in any physical sense, but because their motion in the sky is constrained. You will never see them farther than 28° and 48°, respectively, away from the Sun in the sky.

The reason for this is easy to visualize. These two planets are in orbit around the Sun inside the Earth’s own orbit.  Their orbits are shown as solid and dotted lines in the diagram. We see their orbits nearly on edge, so they appear flattened like ellipses. Mercury and Venus are now approaching the far points of their arcs, points known as their greatest eastern elongation, at which time they will “round the horn” and begin moving back closer to the Sun (visually closer, of course, not physically closer).

The other six planets are free to move around the entire sky, and can be up to 180° away from the Sun. For this reason, they are referred to as superior planets. Their orbits lie outside our own. Visualize this: if you lived on Pluto, the farthest planet out from the Sun, all the other planets would be inferior.