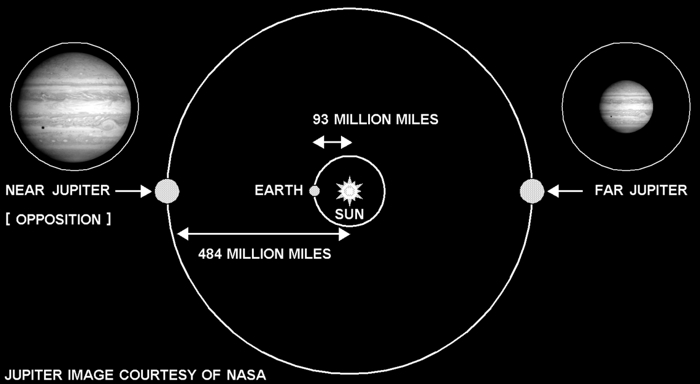 Question: I heard Jupiter is getting brighter. Did it get hit by a comet again and catch on fire? — SB, somewhere in the Capitan Mountains, NM

Answer: Stars are so distant (millions of times farther than the planets) that Earth’s own motion through space makes little difference in how bright they appear to us.

Planets are close enough that Earth’s motion does make a difference. The diagram uses Jupiter as an example. Note the orbital radius given for each. Depending on their relative positions, Earth and Jupiter can be as close as 391 million miles or as far as 577 million miles. That’s a difference of 48%, so when Jupiter is nearest it looks 48% bigger and shines with 220% greater brightness. The inserts compare telescopic views of Jupiter at these two extreme points — your eyes would not detect the change in size, but would easily detect the change in brightness.

This year, Jupiter reaches its point of closest approach to Earth on April 3rd. In astronomical jargon, we say Jupiter is at opposition. The diagram shows the geometry. When at this point, as seen from Earth, Jupiter will be in the opposite direction as the Sun. This means it rises at sunset, sets at sunrise, and stays up all night. Jupiter will be the brightest object in the sky for most of this month. Check it out.